Writing in rivers and on the wall 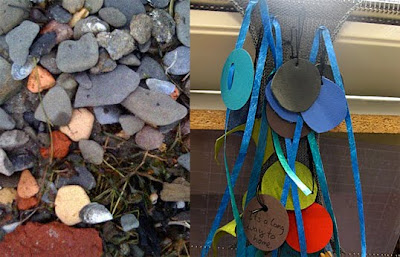 I have some pretty pictures to share. Above is the latest development on our Maker Faire project. It's called Rivière Memoir. We're knitting a river into which you cast on your memoirs either with "stones" or "river grasses." The river is further enhanced by LED-sparkle and a virtual river of swimming memoirs. I can't wait to take this thing out on the road. Maybe we'll do a little of that later in the summer just to find out what people do with it. I hope for some surprises. 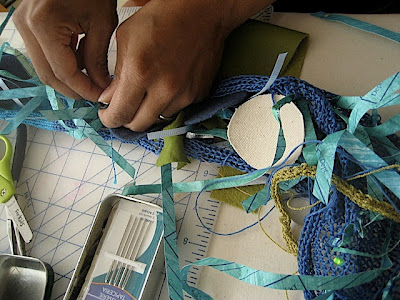 And here are some pictures from a hand-lettering workshop we attended last week at The Future of Reading symposium. 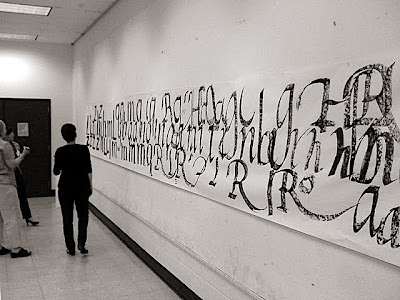 The woman in above is Professor Lorrie Frear. She teaches graphic design at RIT and her hand-lettering skills are off the chart. Below is famed type designer, Kris Holmes. Both instructors took a "just do it, you can't fail" attitude with the workshop participants which, as you know, I adore. We had fun. I definitely need to pick up one of those giant markers. 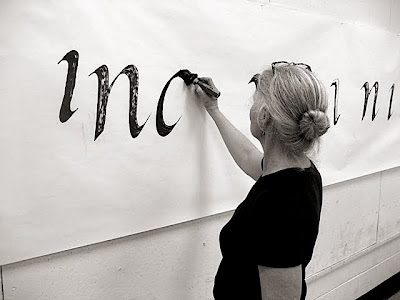 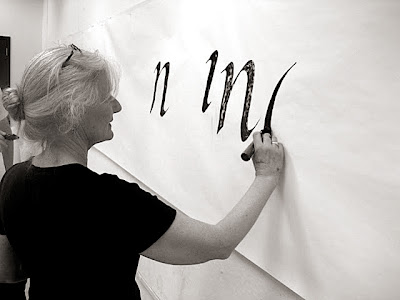 A few local foodie pictures to share. This morning we went to market in Dewitt Park and were o so happy to see garlic. And carrots. Lookit how pretty! 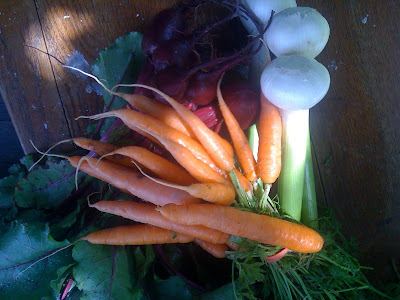 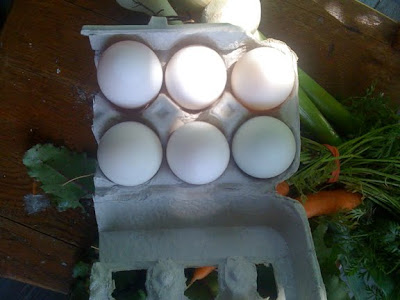 After the market we went out to Eco-Village because we have a berry share there. They have all kinds of small businesses running out of Eco-Village. It's impressive. The one we support most is Kestral Perch U-pick Berries. How it works from our end is that we pay them a lump sum at the beginning of the season and the owner/operator, Katie Kreeger, emails us every week telling us what and how much we can pick. We're very impressed with how Katie runs her business. It's an honor to support her.

Today we got to pick two quarts of strawberries (actually Cory picked them - I roamed around). The strawberries taste even "sweeter" this year as last year it rained too much and there was no season.  Strawberries grow very close to the ground so when they get too wet they mold and mush up : ( 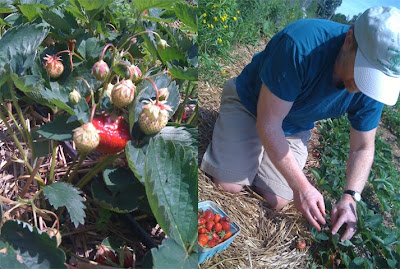 What to do with my silly little dog is always an issue when we go out to Eco-Village. Often I tie her up to the posts that frame the blackberry patch. Here she is glaring at me. On the left of the glaring image are the beginnings of raspberry season which is almost always super plentiful. The darn things make fruit in summer and then again in fall. 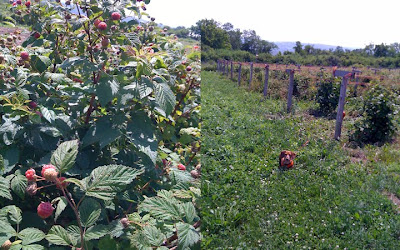 So that's my local food report for early-mid June. We pick up our first CSA delivery later this week. As for the Rochester falcons, Archer and Beauty ended up having two girls. They grow bigger by the minute and are due to fledge by the end of this month. You can check in on them here. Maker Faire project is moving along and hope to report on that soon. 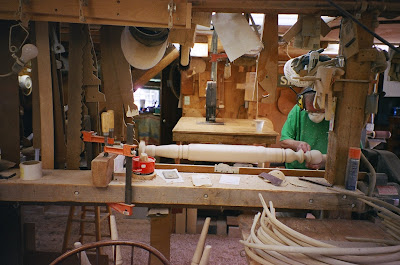 This past Thursday I heard Chris Anderson, editor-in-chief at WIRED magazine, give a talk called "Tablets and the Future of Media" at the Future of Reading symposium at RIT. I deeply enjoyed his talk.

I'm a fan of Chris Anderson's because he has some pretty radical theories about how new technologies and new social behaviors will disrupt traditional markets. (He didn't really go into them with this talk but you can check them out in his books: The Long Tail and FREE). In this talk he wore the hat of a magazine editor with a lot of creativity, failed experiments, and insights under his belt. He spoke artfully about his periodical and his plan for maintaining its relevance in a digital media revolution.

A month is a weighty amount of time to wait for content, and thus a lot of planning goes in to making it worth the wait. The staff plans each issue six months in advance. They maintain secrecy about its content so as to deliver a Christmas morning experience with each issue. And his research shows that when people read it, they spend close to an hour with it not the three minutes or so that you spend reading a web news page.

They tried web experiments with WIRED, but the experiments failed. So Anderson went kind of retro with the approach to the iPad app. It's not cuttable, it's not pastable, it's not linkable, it's not sharable. It's not any of those things that we expect from digital media. What it is is a highly curated, highly crafted monthly magazine in digital form.

Douglass Rushkoff's book about innovation, called Get Back in the Box, argues that firms often put too much emphasis on "thinking outside of the box" when faced with disruptive technologies in the marketplace. Instead, he suggests that what firms really need to do to stay relevant in a disruptive environment is to return full throttle to their core mission. To figure out what they do best and go even deeper. This is what Anderson is doing with the WIRED app.

SCRIBES AND THE PRINT REVOLUTION. Before the print revolution, scribes owned the words-on-paper market. When movable type came around, sure, they could have been out of a job. But instead, they dove deeper in to their craft and crafted pages that were so ornate that no press could reproduce them. They employed what type designer Kris Holmes refers to as The Radical Hand. Would these ornate pages ever compete with the distribution capacity of pages off the press? Of course not. The best scribes survived the print revolution by making something that was deeply expressive and beautiful (and thus expensive).

CRAFTPERSONS AND THE INDUSTRIAL REVOLUTION. Industrialization brought mass-produced goods into many people's homes. Just like the printing press did, modern machinery reproduced stuff, this time objects, that common folks did not previously have access to. There were the luddites, of course, who monkey-wrenched the works to protest being replaced by machines. But there was also an incredible emergence of craft. These people made furnishings, for example, that were so intricate that they could never be replicated by the machine. And that made them pricey. Again, was craft furniture available to the masses? No. Did its quality and beauty keep the best artisans in business in a machine made world? It did.

MONTHLY PERIODICALS AND THE DIGITAL REVOLUTION. It's funny for some to think of monthly magazines in the context of craft or high art but as a trained graphic designer, the interplay of luscious images with type is as high as art can be. Anderson showed us an example of the WIRED app. The team had clearly dove deep into what it means to be a monthly digital publication. The app is incredibly rich and thoughtful and well crafted. Is the WIRED app cuttable, pastable, linkable, or sharable? No. Will it reach as many people as the bits of WIRED that they will inevitably release for free online? Of course not. Will it keep an artful monthly magazine alive through a digital revolution? Probably. Anderson is leaps and bounds ahead of his fellow crafters in the magazine business.

For more on the Future of Reading symposium, click here
Posted by Unknown at 3:25 PM No comments:

This poem is inspired by stories that my mother told me, or by things I observed, about her life. My mother's life was a series of could-be failures that she turned in to opportunities over and over again. As for the poem's form, I played with the constraints of six word memoirs and I chose to make the poem twenty lines long. Let me know what you think. 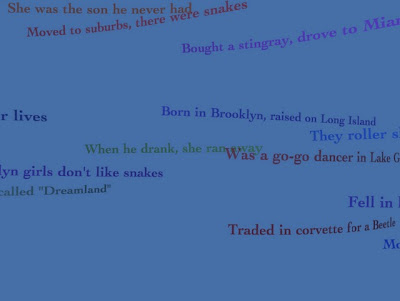 Peddled Ice Cream on the boardwalk

Four in a one bedroom on Ocean Parkway

When he drank, she ran away

She was the son he never had

Disrespected her mother for staying with him

After high school, sailed to Europe

Brought back a love of primary colors

Bought a Stingray, drove to Miami

Was a go-go dancer in Lake George

Fell in love with a musician

Made him quit drugs, then married him

Moved to Brooklyn, had a daughter

Traded in Corvette for a Beetle

Moved to suburbs, there were snakes

Either he left or she kicked him out

The first wave of divorced parents

They roller skated in shimmery tights


still image: W. Michelle Harris
Posted by Unknown at 7:05 AM No comments: